THE CAPITAL OF ROMAN PROVINCE OF ASIA-EPHESUS 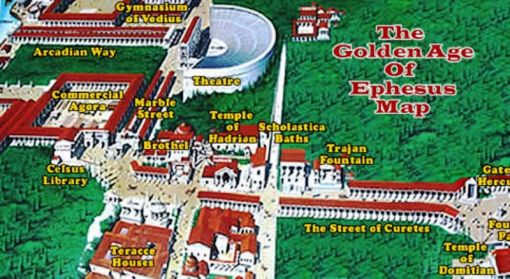 Ephesus is located between two hills with the silted ancient port  and about three kms from Selcuk town. It belongs to greater Izmir province and 10 kms to Kusadasi, 65 kms to İzmir. The ancient town used to be the home of  historical  Greek and Roman ages so it grabs millions of visitors each year. There is a good connection to Ephesus from all over Turkey and it is only 40 minutes drive from the third biggest airport called as İzmir to Ephesus.
Name

The name comes from Hittite Word “ Apasas” due to Greek  could not do the correct pronouncation so  they converted it  as Ephesus. It means “the bee “ so Ephesus was the city of the bee. The bee was minted on the coins dated 11th BC in Hittite period.
History
Ephesus  has been known as the home of Greek Artemis, Roman Diana, one of the seven wonders of the  ancient world, used to be center of the paganism about one thousand years, later it became the first of the seven churches of Revelation. First Pagan then Christian pilgrims made Ephesus as the center of their faiths like Vatican today  so it was visited by millions  each year. On the other hand, The port of Ephesus was the central of sea trade in antiquity between Asia, Macedonia(Europe) and North Africa. The first settlement in the area was done by Amazons according to some legends but the findings shows us Ephesus was first founded by Hittites about 13 th C BC and it fell into Greek hand after the fall of Troy in 11 th BC by Greek commender Androklos . Then the  Romans captured  Ephesus in 1st C BC and Roman emperor Augustos declared Ephesus as the capital of Roman Asia. Ephesus was noted for all over the world as one of the three  wealthiest cities of Roman empire between the 1st and 2nd C AD, in the time of Pax Romana (Roman peace). The population was 250.000 without slaves and the third largest city after Rome and Antioch. During  Pax Romana, 2 apostles, 4 deciples, 16 Roman emprors and so many famous people in the history  have been to Ephesus. Trade, religion and politics made Ephesus  much visited city in  Roman province of Asia. St. Paul  had  3 years and St.John  had 7 years in Ephesus in order to set up a Christian congregation.  But the glory was ended up at the end of the of 7th C AD because of the earthquakes and mosquitos. The city first lost its natural port and then invaded by mosquitos so maleria became the main threat for the inhabitants. The city was abondent and was left in ruins for centuries. In 13 th AD Selçuk Turks conquered the ancient town and the new name was Ayasuluk that they built a castle to defend the Selçuk town against the Crusaders later. In 1413 Ottomans took over the town.

The  Sights which worth visiting in Ephesus 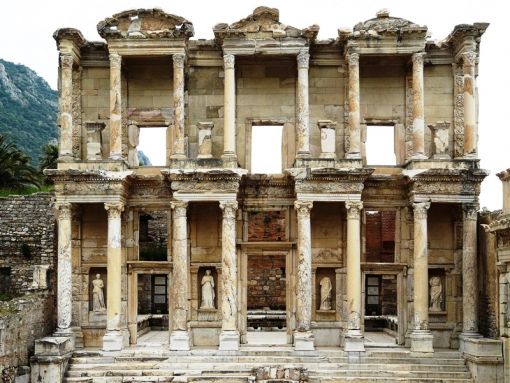 Present Ephesus for visitors covers about 200 acres between  Nightinagele and Pion hills.  and some parts of the area is closed for excavations. Today the expedition trip is done between two gates and the visitors usually begin their journey from upper gate to lower one where the big parking lot is located so 2.5 miles is the distance to see ancient Greek, Roman and Byzantine edifices. 85 %  of the ruins are original, 15 % of them are reconstructed by Austrian archeological team. Here are some highlights of Ephesus.

It has two different names ;  a city council chambers (bouliterion) and concert hall (odeon) for watching the politicans and listening to classical music. It looks like a small theatre with 1400 in capasity. The edifice was used for all important events for only rich and distiguished Ephesians such as poetry redaings, prize giving ceremonies, court cases and beauty contests twice a year were held.

Attached to the senate house where 12 virgins had to keep an eye on the sacred fire to be burn alive for 30 years, known as Vesta Virgins in the history. It is believed that the sacred fire was brought from Parthenon in Athens to Ephesus as the city was established.  You can see colonnaded walkway in front of the vesta temple in three orders today ; Ionic-Doric and Corinthian types.

1st century AD building was the persecution center of Ephesus  for early believers where they had to worship to the emperor’s cult every day. It is situated in centre  of the state part with ruins and statues. Emperor Domitianus declared himself as Zeus in 85 AD and later he sent John the evangelist  to Patmos island  as a prisoner from Ephesus that is called exile in the Bible.

Nike in  Greek, Victoria in Latin, was one of the olimpians as the goddess of victory, has a flying relief in the middle of the square of Domitian. Here all of groups stop to be taken the picture with Nike,  if a Turkish guide makes a joke saying “Look  Goddess has Nike trainers !.”

One of  the monumental Roman fountains in Ephesus with the restoration work in 1970s makes you stop in Curetes Street. It was built in 2nd C AD and dedicated to empror Trojan to provide the free water to public. The mark of the edifice is the globe figure claiming the world is round. It is amazing beacuse not only yhe Ephesians but also the Romans knew that the world was round even in 2nd AD.

Hadrian was one of the idolised Roman emperors, successor for Trajan in the second half of the 2nd C AD. The temple has been restored, repaired and redone recently by archeologists. Although it is very small, it is worth visiting and looking at Medusa, dangerous lady with snakes in Greek mythology, eggs freezes means fertility  and acanthus as the leaves of life tree in belief can be seen both on the facade and on the walls of the temple. 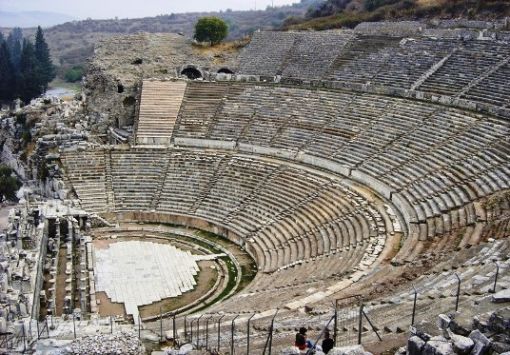 This 2nd C AD building locates in down town as the highlight of Ephesus city. It was not only the second largest  library of its time, but it was also a big university as Standford for Romans scholars. It was restored in between 1970 and 1978 and front wall has four main statues with written inscriptions in Greek. Between the front and rear walls shelves with books made from papyrus can still be seen today.

The business center of  Ephesus in square shape with a big courtyard in the middle had large stores to sell all kinds of goods to the visitors. It was opened in 6.30 AM, and was closed 3.30 PM. The agoranames, the groups of the peole who were responsible  checking out prices and scales in. Four big barber shops in four corners of the square used to get info from shoppers while having a haircut as tourists offices.

It was curved on the slope of Pion and faced to overlooking the harbor to understand which cruise ship was appoaching to the port. It was the home of public announcements, greek tragedies which last long hours,important speeches by pagan priests, elections and gladiator fights were happened. It had 24.000 spactators’ capasity and  is divided into two main parts  ; lower seats for aristocrats, senators, rulers and rich merchants, upper seats for poor. Today it is under the preservation so some upper parts were closed.

First of the Seven Churhes in Revelation

We know that John came to Ephesus with Mary and he was exiled to Patmos island. After spending 14 years there, he was freed and came bak to Ephesus  to complete the Gospel here. During his last days, he also visited seven major cities that are known as seven churches of reveletion. In the first chapter of Reveletion, a letter to Ephesus is written and the church is warned with a nickname as lovelist church”. God warns both the church elders and the believers not to lose their love to the Christ and always follow their promises.