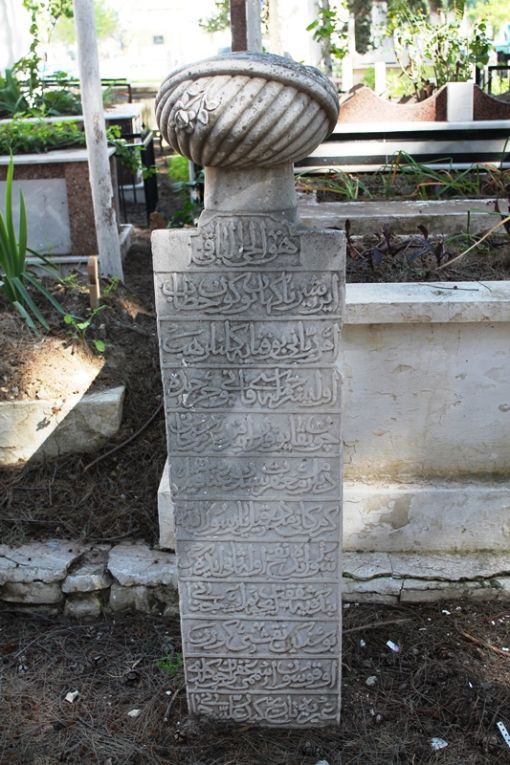 The Ottoman gravestones ,which spread over three continents  in the world, are the main  cultural heritage not only in Turkey but also in European countries to give detailed information about the history today. They are also the illimunating written archive documents of some former Ottoman states in Balcan countries  reflecting the historical, social, economical and sociological events in Ottoman period more than six hundred years. The Ottoman gravestones are accepted as the stone libraries that can be learnt a lot of information from the ephitaphs, symbols,figures and marks. For instance, we can learn the types of occupations in Ottoman periods from tombstone headgears whom they were worn and we can learn the meaning of ephitaps  from gravestones what they were in Ottoman society. Ottoman people , who understood the particular grasp of the intricacies of Islam's message in a good way with  its institutions, traditions and usages in practice, gave  the  big importance in the cemeteries and graveyards. Ottomans revealed the objects that respond to the needs of the people as the works of art in the most beautiful way. In other words, Ottoman art was usually functional. Gravestones , which give the most valuable information about the past as being explored, are the artworks. Ottomans installed the cemeteries and graveyards inside the towns next to the schools, bazaars, lodges, backyards of the mosques as reminding the death everyday in life with the most beautiful expressions on and they tried to prevent the ambition of the world with the most beautiful artworks. Ottoman gravestones are the excellent preachers which begin with Allah as  the only creator, continue with Koranic verses and hadiths,  express the identity of death person in the grave, give advices to the visitors, the date of death and ends  with blessing. So the Ottoman cemeteries and graveyards are located in downtowns. The main aim is to remind the death  always and the temporary of the world. The death people need only the blessing so the passers-by or the visitors send their blessing to the death in graves both earning reward and not forgetting the death. How could you remember the death ifyou didn’t pass by a cemetery everyday ?  For this reason the Ottoman gravestones were placed on the pathways, on the roads of the bazaars, backyards of the lodges and the mosques. Ottoman people were supposed to go to the mosques five times a day so they used to pray five times to their dead relatives and ancestors. Ottoman Turks had always lived with their deaths so there is a common word in Turkey that the foreing guests say “ Turks live always with their death people. “ 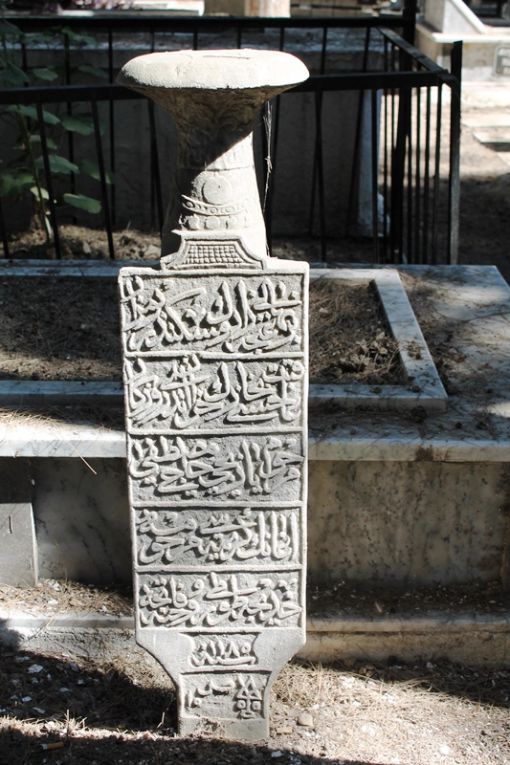 Kusadasi Adalızade cemetery is the only historical burial place located in the middle of the town which has a lot of endengared Ottoman gravestones with a shrine in central called as “ Adalızade Turbesi”. Mustafa bin Hamza was one of the famous scholars and sheiks lived in 17th century and we do not know much about his biography. Mustafa bin Hamza was born in Istanbul, educated in Seman madrasah and was sent to Kusadasi to  train the inhabitants in his madrasah built in a little bit out of the town surrounded by vegetable gardens. During his training Mustafa bin Hamza was loved so much by the local people and he was given a title known as “ Adalızade-the person from Kuşadası “ then he was known Adalızade  all over the Ottoman empire. He died in 1677 according to  his gravestone inscription and was buried in the cemetery and later his shrine was built over former grave. The inhabitants of Kusadasi began visiting his shrine on Thursdays, in the eve of religious festivals, in some occasions and anytime when they need spirutal help from him. The lovers of him also wanted to be buried around his shrine to be with him in a spitual way till the resurrection time so a big cemetery has been formed since 1677 with hundred of Ottoman gravestones.  In 1930s some small graveyards  in Kusadasi were removed  due to  town’s enlargement and in 1960s tourism began in this town so Ottoman gravestones from the old graveyards were transported to Adalızade cemetery to be protected and preserved. Unfortunately about 3000 endengared gravestones were broken to be used in some constrcutions as substructure, channel border stones or etc and some hundreds were disappeared so we have about 500 Ottoman stones  were left today. The gravestones in the cemetery  give us interesting and detailed information about the town’s history past with written inscriptions in Arabic. The gravestones in Kusadasi Adalızade historical cemetery were made between 16th and 20th centuries. The Kusadasi Adalızade cemetery are classified in two main parts ;  male and female. T he female gravestones have some unique ephitaphs and symbols such as mosque figured gravestones are about 26 stones having the beautiful decorations of mosque reflecting their faiths. The main message  with double or single-domed mosques adding the minares on ladies gravestones in Aegean region is that the mosque accepted as the sacred place. In Turkish symbolism, the crescent & stars describe the freedom & patriotism,  the pitcher motif represents cleanliness & purity , the  figured mosque represents a moslem worship  place and it reminds Allah is the great creator, the owner of the judgement day , the merciful and forgiving sins. Another group of female gravestones are called “ hotoz “ with slim and charming appearences with chains on their necks and signs at the bottom parts. Hotoz style on  ladies’ gravestones  have been used for centuries as to show the elegance of Ottoman women with spectecular decorations. The the most special features of Hotoz headgear is to have a thin neck under an elegant headgear surrounded by gold-filled chain necklace on figured coins in flower patterns. The Hotoz headgear looks like  a luxury  & an attractive hat which grabs the people ‘s gaze at once. The male gravestones in Adalızade cemetery  generally Show their occupations or sects while they were alive. Serdengeçti is one of the best exmaple here with unique headgear.Serdengeçti was the headgear used only by delta force soldiers in Janissary army troops. Serdengeçti or Dalkılıç Janissaries were the soldiers who were volunteers in Ottoman military system as special force to do dangereous tasks   such as to capture the castles under the seige, to attack enemy lines with swords without fear and to hit the final blow. As they attacked with their swords to complete dangereous tasks, they  were noted for as “ Dalkılıç “ among the other soldiers. The second large group of male gravestones in Adalızade cemetery are known as “mariners “ with a special headgear called as “ makdem “.The Makdem headgear was worn by a large number of sailors who have been involving in maritime business such as galleon owners who owned big ship to carry the goods from different parts of the world to  Ottoman empire, sailors worked in as captains of the boats, mariners called  Azaps as the special mariners. Kusadasi  used to be naval base for centuries to control Aegaen sea and Agean islands so there was a  big garrison for mariners in the town since 1530 AD. The best examples of  main sects Baktashi and Mawlavi gravestones can be seen in this cemetery as well as Malami teaching gravestones.
Resource  :www.turkeygravestones.com