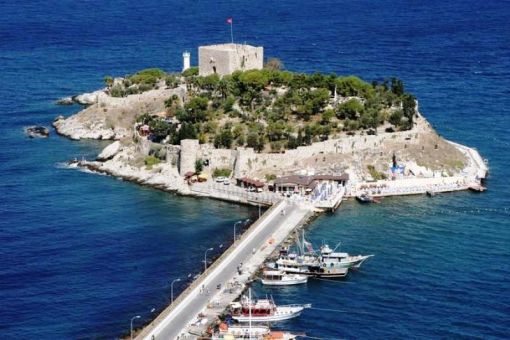 Due to  be host of many civilizations of  its long history, Kusadasi has several dozens of both  historical and cultural buildings and monuments to be preserved as heritage. The heritage buildings dated from 1100 BC to 1930 early Republican times.
The list of Heritage monuments

Pygale antique settlement
Water Acquaducts
Pigeon Island Fort
Observation  Tower
Caravanserail
Kale içi Mosque
Ottoman baths
Ibramaki Art Gallery
Wren House
Old Town
Judge Castle
Old Kusadasi houses
Street Fountains
Old town tanneries
Kusadasi used to be trade port after 1616 and it became of of the main export &import center in Ottoman period to make the commerce between Ottomans and Europeans, especially by the Venetians on the Aegean and Mediterrenaen Maritime.  Ottoman authorities used this port importing tobacco, salt, wheat and silk and exporting Turkish dried grapes-Sultana raisins, hand made rugs and wood coal su Kusadası has been the main trade center of the Ottomans on the Aegean seashores. A lot of foreigners, Jewish brookers, Greek Rums merchants from Aegaen sea islands came here nad were settled down to make trade. Jewish, Turkish, Armenian and Greek Rums congregations have been formed in 50o years past. The congregations lived in their private own district seperately but in peace for centuries. They have made a lot of edificies, temples, stores and houses to survive their own culture until 1821. In 1821 Greek revolt was the first disintegration time, in 1912 Armenians revolted to Ottoman rule and during the first world war Kusadasi was invaded by Italian troops first and then by Greek troops. In 1925 a great exchange happened between Turkish republic and Greek government. The Greek Rums were sent to Greece and Turkish pepople were brought to Kusadasi so the town lost its original demographic past. 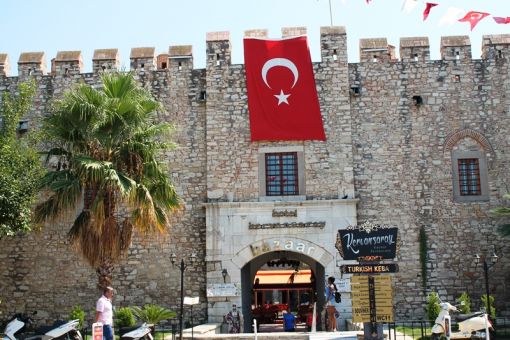 The Jews also were emigrated to Israel in 1948 and some groups moved to be settled down in Izmir province. Altough Kusadasi has a rich past, due to the conflict in the past, we do not have a lot of historical monuments left. During th Greek revolt and first world war Kusadasi was ruined by the fights and it was bombed by Alliens in 1918 and 1920 several times and the town was hit on the ground. Its is believed that Pygale antique settlement had been established  after the Trojan wars where Agamemnon stayed here with his army troops to cure their hip diease. It is located on the way to Selçuk, just three miles oout of the downtown. During the Roman times luxury villas were built and then in Byzantine period a big church was opened to the service. The Değirmendere  Aquaducts were the main water resorvoir channels to send the water to Ephesus are the oldest water ways around Kusadasi. The aquducts were built in Roman times in the best possible places to reduce the pressure of the water not to make any damage on the way it flew down.  Pigeon Island fort was made in 1534 when the famous Ottoman admiral Barbarossa became the master captain of the Ottoman navy and he had the fort made and 10 Ottoman canon balls were put to defend the town with 50 mariners. The fort has been recently restored and nowadays the pathways and terraces, visitors welcome center and ticket Office are being built. As soon as they have been completed, the Pigeon island fort is going to open.  Andız was tower was the first Turkish monument built by the Seljuk Turks before capturing the town around 1100 AD. As the Turkish tribes took over the Ayasuluk province that we call Seljuk today made a watch tower  here. Andız watch tower was enlarged during the Turkish period adding with two storey building and a small mosque for the travellers.  Caravansearil used to be the the oldest shopping mole as well as the ancient inn where the caravans used to spend the nights in safe. It was built in 1615 AD by the Ottoman prime minister  called Konevi Mehmet Pasha as part of the big külliye-complex in the middle. The travelers were stopped here to spend the nights to be kept away from pirates and they could stay here for three free days without any payment. Today Caravanserail is housing the traditional Ottoman handicrafts. Kale içi mosque is the only Ottoman imperial mosque built as the main core of the külliye by Konevi Mahmet Pasha in 1616 so it is the oldest Ottoman mosque in the town. 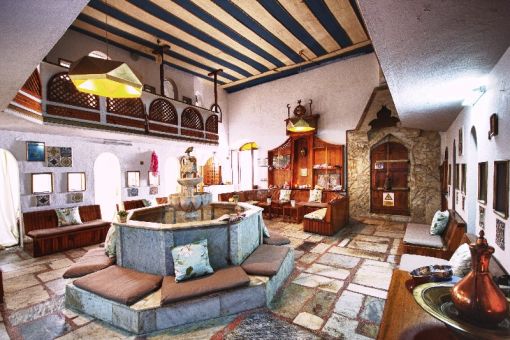 Ottoman baths were the main cleansing centers of the Ottoman soceity due to the main principle  is to prufiy payers’ bodies before they devote tjemselves to Allah so Turkish moslems have always built the baths and mosques side by side since they became the muslims. A moslem has to clean his/her body before he/she goes into the mosque. During the Ottoman period, Kusadasi used to have a lot of bath house consisting of two main parts ; Female and male section seperated with private gatesin both sides. Unfortunately  these baths had been ruined in the past 50-60 years because of having private bath units in homes as taking shower and Turkish bath culture is being removed today that is why we have only two old Turkish bath houses are the reamins as the touristic places today. Ibrahimaki art gallery is one of the best examples of old Kusadasi houses types with a large farden at the back. The house was built in late 19th century AD and it was used as the hospital of the town during the first world war and it served as the girls’ vocational school until 1970s. It was restored by Kusadasi municipality and is being used as an art gallery for the exhibition and small musical performances.  Wren House-Çalıkuşu – is a famous novel which was written by famous novelist Reşat Nuri Güntekin in the beginning of Turkish Republican era in 1930s. According to the novelist, the main hero of the novel, Feride, the young female teacher, came to Kusadasi to teach new latin alphabet to the Kusadasi youngesters and she used to live in an old Kusadasi house. Her house became so famosu in 1950s and the town inhabitants wanted the house restored and used as a museum so municipality of Kusadasi had a great restoration on the house to keep alive with sweet memories. Old town of Kusadasi-Kaşe içi district- is  full of old type of Kusadasi houses either with two floor sor one floor. The narrow streets can reflect the old way of life in Ottoman times with small restaurants, taverns, souvenir shops and small boutique hotels. The old town is worth visiting   either to drink a cup of traditional Turkish coffee or having the lunch to taste famous Turkish cuisine.  Kadı castle-Judge Fort-is about  6 miles away from down town on the way to natural park. It was built as a big fort to defend Scala Nouva-the Byzantine town in 9th century AD from the Arabic raids and then it became the customs house between Turks and Byzantine later. It was added to Ottoman empire in 1413 as Kusadasi was taken over and it was enlarged to a big fort. During the Greek revolt in 1821 and in world war the first, it was used as the main headquarter of the Ottoman troops to control the Greek island Samos and to stop British and French invaders. Old Kusadası houses are located both in kale içi distict and Camiatik hill overlooking the port of Kusadasi. The old Kusadasi houses on the Camiatik hill were built by Jewish & Turkish congregations  and the old houses on the church mountain-kilise dağı by the Turks-were built by Greek Rums in between 17th and 20th centuries AD.  Kusadasi used to be a cosmopolitan port town like New York today where all different congregations lived in peace until 1922. Street fountains are one of the main elements of Turkish Culture. It is still a big tradition to have a fountain built on a street and deliver free water to public so Turks enjoy making the street fountain to provide free water to the people. The people who didn’t have any water installment in their houses used to go the nearest street fountain to bring some water to their house regularly. The owner who had the fountain made was celebtared by the inhabitants of the town and he was blessed by the religious authorities as well. One a time Kusadasi used to have about 90 street fountains but unfortunately we have only 17 ones in the old streets of Kusadasi.  Old town tanneries which are being used as boutique hotels and cafes today were established to produce leather from animals skins after 1830 by the Turkish immigrants from Crete İsland and Peloponnese peninsula emigrating from Greece. The tanneries have been opened to produce the best quality of leather products both in 19th and 20th centuries AD and they made a great contribution to the local economy. After 1965 when Kusadasi began becoming as the candidate for Turkish tourism industry, the old tanneries were emptied first and moved out of the town and they were left in ruins. About five years ago, they were restored and opened as the traditional handicraft center as well as the boutique hotels today with street cafes and nice small restaurants.