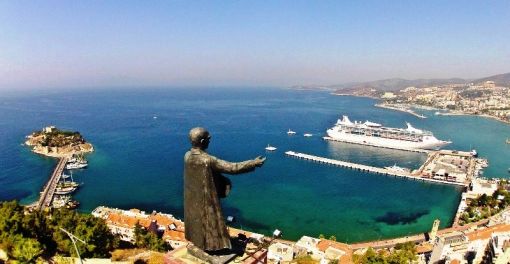 Kuşadası  is located on gulf of Kusadasi of  the Aegean  sea between Turkey and Greece.

Kuşadası caters to tourists arriving by land, or from the port for cruise ship passengers heading to Ephesus.

According to Greek Historian Homer, Agamemnon who was the famous commander of Spartans,  cured his soldiers in  Pygale on the coastline of Kusadasi

Turkish famous traveler Evliya Chalabi said that Kusadası had a port with 500 cargo ships capacity in 17th century AD as one the most famous export & import center.

The last home of Virgin Mary is in Selcuk near Ephesus.

One of the seven wonders of the ancient world called Artemis temple is 10 miles far away from Kuşadası.

The  National park , which is about  18 miles to Kusadasi port, covers almost 28,000 hectares and features azure coves and pebble beached backed by pine tree forests. This “nature museum” is home of 804 kinds of plants belonging to various species and subspecies,  of which are unique to the region. About 250 species of birds can be spotted here, 68 of which breed in the area.
Kuşadası is in the middle of two great Ionian cities, Ephesus on the west and Panaion on the east.

Kuşadası is the second buisest port of Turkey after Istanbul but is the capital of cruise ports of Turkey because each year at least 550 big cruise liners pay a visit to Kusadası port.

The language in Kusadasi is Turkish, but on touristic spots you can also use English.

The currency in Kusadasi is New Turkish Lira (₤, YTL). You can find ATM’s along the city.

Kuşadası entertains about two and a half million holiday-makers as well as 900-1000 cruise ships  call at Kusadasi port for east Mediterrenean tours from the beginning of May to the end of October.

The capasity of beds including all hotels and holidays inns are about 30.000  and there are about 350 hotels  with  majority of them three stars cost about 25 USD per month included bed &breakfast so during the high season from May to October is fuly packed out.

The town has 134 travel agents organising a large variety of Daily excursions from Kusadasi to different poplular resorts and destinations  both for holiday makers and cruise clients.

The port of Kusadasi is an international cruise ports as the hub of main leading cruise companies such as Royal Cariibean International and Celebrity Cruises. The other famous maritime companies ship call at Kusadasi port as well in summer months. The port has two main quays in different lengths ; the long one is 264m and the short one is 255m. Both of them are able to anchor even to 7 cruise ships in one day. The capasity of total cruise liners annualy is about 2,400 ships.

Kusadasi has an exhibition center recently built with  a big Oditerium 3400 seats, a congress center in 1000 seats, a big conference hall 900 seats and  20 sallons in different size and capasities for participants with large parking field in front, just aabout 6 miles away to the down twon.